Dataframe was loaded from Excel file;

When you export data via “save as csv”, the file is saved in UTF-8 with correct headers and content.
After csv reimport with “UTF-8” encoding - the same problem in the intarface.

So it looks like the problem is mainly related to interface, not to R or its settings.

In Mac version the same problem do exist.

Another problem - cyrillic names does not work for import dialog in Windows version:

as well as for custom script import:

while the same script works fine for Rstudio.

Hi Adrian, can you share a sample data file with cyrillic characters for us?

I’ve just tested a sample Cyrillic letters with IBM866 encoding, and this seems to work, can you try this with custom R script?

Once confirmed, we’ll add additional encoding types to the UI.

For our testing, it would be still great if you can give us sample data with Cyrillic letters. Thanks!

Dropbox is a free service that lets you bring your photos, docs, and videos anywhere and share them easily. Never email yourself a file again!

I will try your file tomorrow.

So the problem is only with windows version / russian locale.

Thanks for confirming, Adrian!

We have added additional encoding types in the data import dialogs, so you should be able to select the one you like. This will be in the next release, we’ll be releasing early next week.

For the Windows issue, we had very similar issue with Japanese characters as well. This seems to be some issue with R, it’s also an issue in RStudio as well. We haven’t found a concrete solution for addressing this for Windows yet, but will keep looking into it, stay tuned!

As Kan mentioned, we added a lot of new encoding options including Cyrillic ones, and we also confirmed we could read your data. It will be available in the next release. 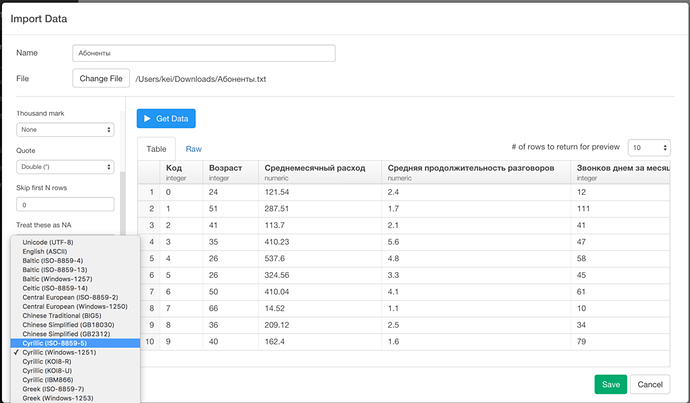 It will work only for Mac? or Windows version will work with Cyrillic characters as well?

The encoding option itself works on windows too. But we have another issue on viewing Cyrillic characters as you mentioned and we are working on it.

Ok, Kei, thank you for clarification.

This issue is real dealbraker for me, almost all my data have Cyrillic characters somwhere, and I use Windows for analysis;
Maybe my ‘experiments’ below will help to resolve the issue, or at least to find some workaround.

Its does not looks like issue connected to R itself (at least in 3.3), R/Rgui and Rstudio in my environment works fine:
Rgui: 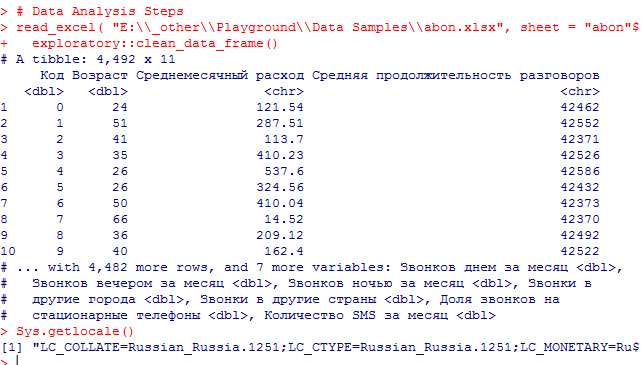 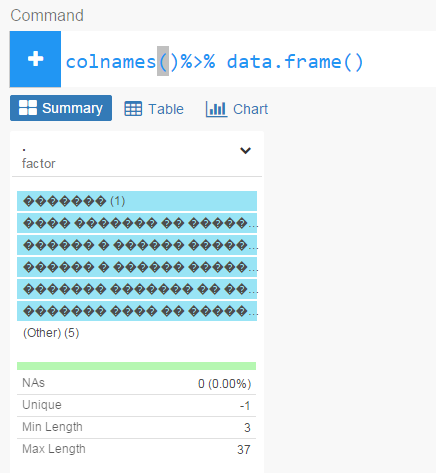 And please note that export to csv from Explanatory work well - file are reindcoded to UTF-8, and can be opend in any other program which supports UTF-8 without problems (eg Notepad, Notepad++), all characters are readable

I think issue is in a way R communicates with Exploratory and RStudio / RGui, system locale used by frontend and the problems with UTF-8 encoding in Windows.

As far as I understand modern R uses UTF-8, but system locale Russian_Russia.1251 are ANSI based.

But somehow using iconv I was able to see data properly: 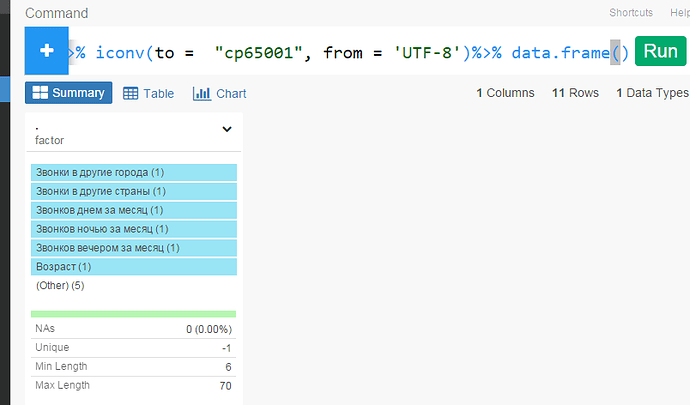 Maybe I can use iconv step to reincode the whole dataframe whis headers and data? and than reincode it back if I need export? (at least as a short term work around)

We’re having similar issue with Japanese as well, and trying to figure out how to support this on Windows. We’ll continue looking into it, and keep you updated. Sorry for the inconvenience!!

I am having problem with Vietnamese characters as well. As in the case of Adrian, the Mac version works like a charm, only does the Windows version encounter difficulties.

Thanks for your support!

We think we have figured out the root cause, still need some time for testing, but will keep you guys updated, stay tuned!

Hi,
Here is a new build of Exploratory for windows with some fixes on the communication between R and Exploratory’s frontend. (Yes, you were right, Adrian!)

We can read multibyte or non-latin1 character data with this build. (So far I tried Japanese csv data in UTF-8 and Cyrillic csv data in Windows-1251.)
But we are still seeing some problems in two areas, and working on them.

Let us know if this fix works for you.
We will keep you updated as we make more progress.
Thank you!

Many thanks Hideaki!!! The new version is working extremely well on Vietnamese characters.
Thanks thanks thanks

Happy to hear that! Thank you!

Unfortunately Exploratory does not recognize the headers in function calls, after importing them sucessfully:
Not recognizing headers

Thanks a lot,
Khanh

Hi Khanh,
Is it possible to share with us a data file with which this issue happens?
Thank you,